Quibim is a startup that has developed software capable of detecting, in just one pixel, data that makes it possible to set biomarkers. These biomarkers could, for example, anticipate a cancer cell or discover relevant information that could accelerate scientific research by many months.

Their initial target audience was outstanding scientists and international medical thought leaders. These people are very difficult to access, due to their professional agendas. They regularly meet at scientific meetings. 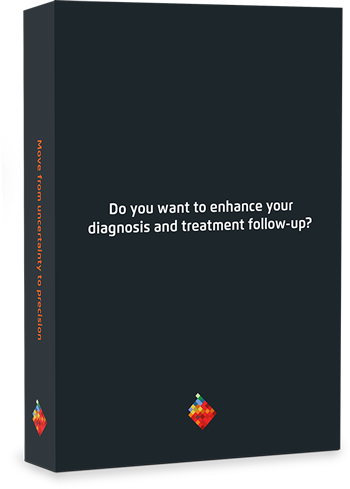 Quibim, for the first time, was going to have a stand to show their software in that scientific event. Because they were not known, the risk of being ignored by these experts was extremely high. The challenge was to make Quibim visible, to awaken the interest of scientists for their software and make them to end up wanting to hire their services. 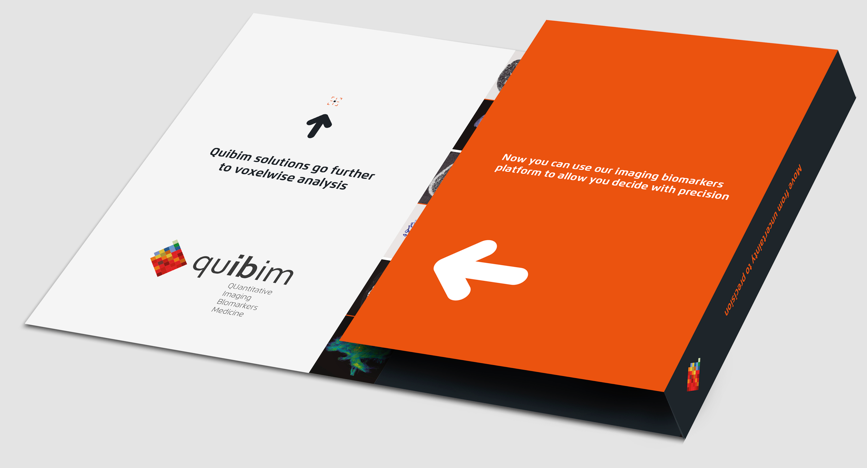 We started with a reduced budget, so we had to optimize resources by only using those which were essential to achieve the primary goals.

Since there were fewer than 100 most influential thought leaders, we opted to create the basic supports and to launch a direct campaign at the target population. If we managed to make them to use the service provided by Quibim, it would to ensure that others would join. 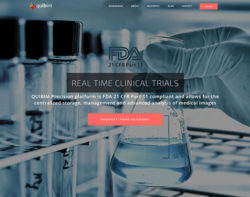 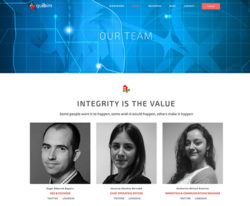 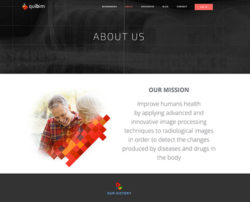 First, we developed a corporate website according to the desired positioning. The great advantages of this software for the sector were explained. The website role was key, since it would not only showcase the company to the world, but it would also be the first place that scientists would go after the actions we had planned. Upon reviewing the information in the web site, trust could be built with the target group should have increase their desire to try this new breakthrough innovation.

Weeks before the meeting, a package was sent to each scientist and specialist, with a key question about how they make their scientific or medical decisions – which is highly relevant to them. The packaged included:
A) A clear explanation what could be achieved with the Quibim Software.
B) Temporary free access to the software so they could carry out real studies.

C) A nice gift to have on their desks to (to always keep the brand in mind), which consisted in “reflection dice” to make decisions that are not as important as those they take in their profession.

Quadriptical brochures were oriented to both targets. Two brochures were made, one for the scientists and other for the medical specialists, and each one with a different approach that responded to the particular interests of both groups. We opted for a format that played with dice to differentiate. This made the proposal more original and attractive.

Quadriptical brochures oriented to both of the targets 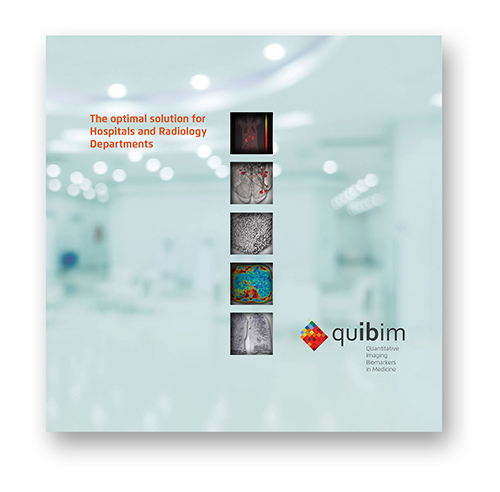 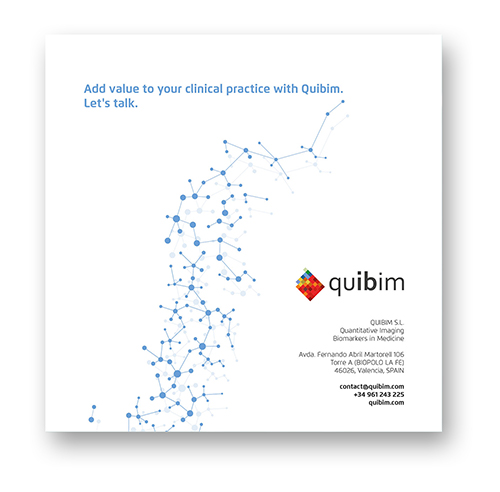 Two brochures were made, one for the scientists and other for the medical specialists, each one with a different approach that responded to the particular interests of each of them. We opted for a format that played with dies to differentiate. This made the proposal more original and attractive. 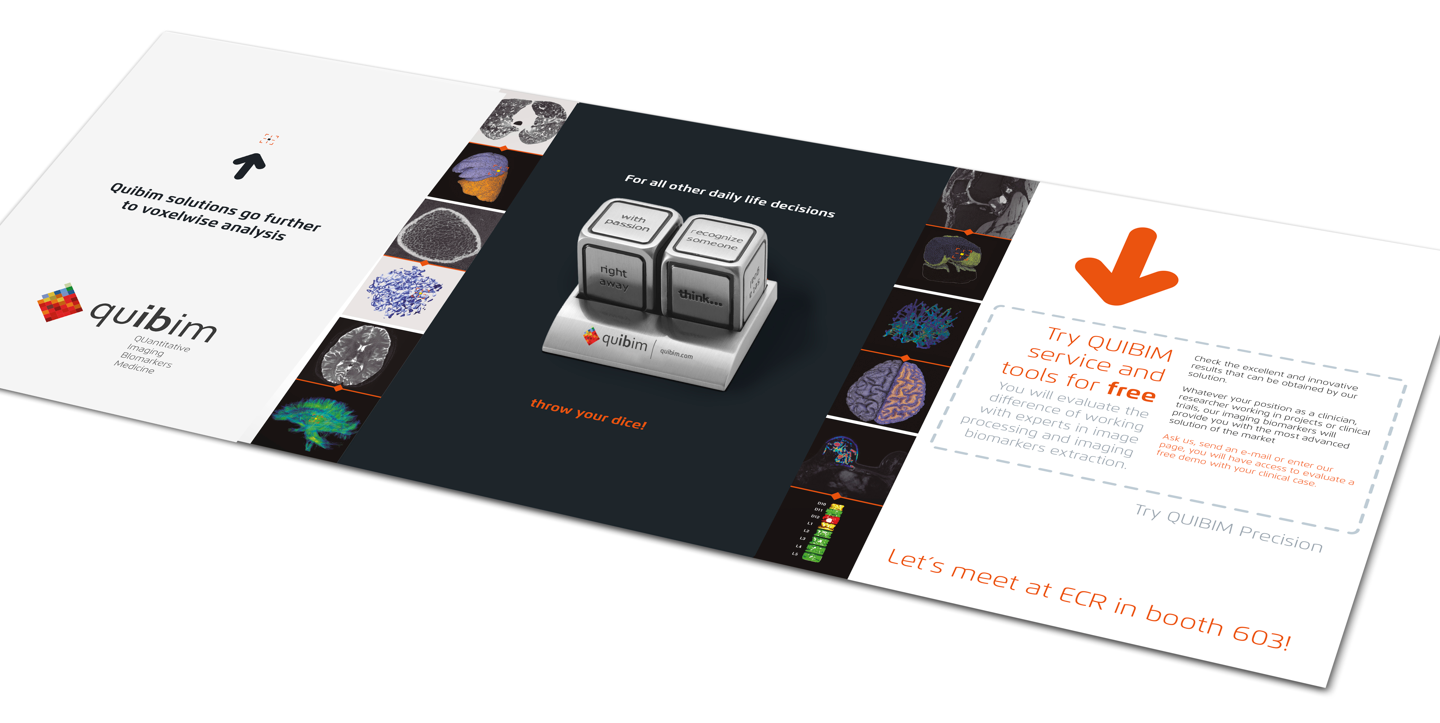 More than 60% of these experts were interested in Quibim’s service. They also asked for more information and met with the representatives of the startup at the international fair. 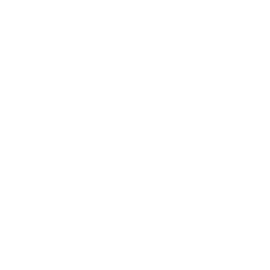 The company’s turnover doubled in just a few months. 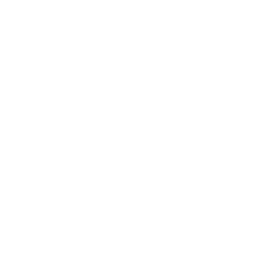 Quibim is becoming a worldwide benchmark for biomarkers research. As a result, it has positioned itself in the American market, where they have opened their new headquarters in Silicon Valley. Its CEO, Ángel Alberich-Bayarri, commented when speaking to one of the most prominent scientists in the world, “… after the campaign, I know that if we call her she will respond to us right away. That was unthinkable before”.